Isn’t this precious?
Doesn’t this photo epitomize the wonder that is Christmastime?

This photo is shared with you through the generosity and permission of Siddalee Photography.
Thank you!!!!
www.siddaleephotography.com

It’s Christmastime!  I love it all: the gathering of family and friends, the sparkling Christmas decorations and beautiful nativity scenes, the Christmas carols, the delicious holiday food and snacks, ….  Also, at the top of my list, is gathering by the fireplace, and watching with family members, those special Christmas movies each year. Today I share a few lesser-known Yuletide gems that have become my favorites.  I hope that you, too, might discover a new Christmas favorite, or two among them! ( The DVD photos below were taken today, near various Christmas decorations throughout my home.)  Merry Christmas!

Do Not Miss These Yuletide Gems

Cary Grant stars as an angel in this magical Christmas film.  Need I say more?!  :o) Grant/the angel is sent to assist the bishop (David Niven) and his wife (Loretta Young) at Christmastime.  Karolyn Grimes stars as the bishop’s daughter.  (You may recognize her from a better-know Christmas classic, It’s a Wonderful Life with Grimes as Zuzu.) This wonderful film was remade in 1996 as The Preacher’s Wife. 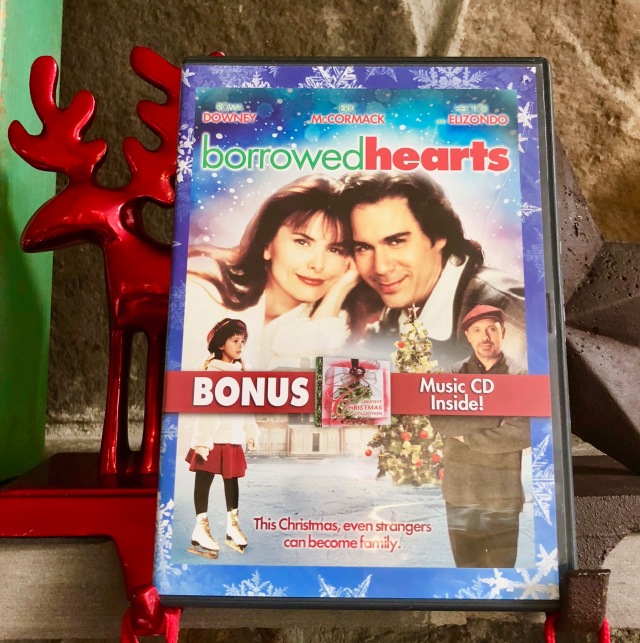 Originally made for TV, this sweet film stars Roma Downey as, Kathleen, a single mother who is hired by her boss (Eric McCormack), to pose as his wife temporarily, to impress a business associate (Hector Elizondo) at Christmastime.
Sarah Rosen Fruitman plays Zoey, Kathleen’s precious daughter.

Probably the best known on this list of movies, Barbara Stanwyck stars as journalist Elizabeth Lane, known for her culinary skills. Although, America delight in Lane’s recipes, laced with stories of her idyllic family life in the country, in actuality she is a fraud. Hilarity ensues when Lane’s unaware editor (Sydney Greenstreet) invites a WWII hero to Lane’s house for Christmas and some good home cooking.
S.Z. (Cuddles) Sakall is wonderful as Felix. This film was remade in 1992 with Dyan Cannon.

Loretta Young and Celeste Holm star as nuns in this charming Christmas film.
Naive and without funds, yet ever faithful, the pair come from France with plans
to build a children’s hospital in Bethlehem, Pennsylvania. Dooley Wilson
(Sam from Casablanca) also stars.

In this post-war romantic comedy, a young Janet Leigh plays a widow, Connie Ennis with a young son (played by Gordon Gebert). Through chance, Robert Mitchum meets the young widow at Christmastime, and takes a keen interest, even though she is engaged (to Wendell Corey). This was remade for television in 1996 under the same title.

White Christmas, Bing Crosby’s signature Christmas song, all started here!  Crosby stars as an entertainer who retires from show business to open an inn that is only open for holidays.  Fred Astaire is his friend, and at time humorous advisory, in this film.  Check out Astaire’s 4th of July dance, complete with fire crackers!

Don Defore (He grew up in Iowa like me!) stars as Jim, a post-war veteran in need of housing in a crowded New York City.  Upon a chance meeting, McKeever, invites Jim to room with him. Jim finds himself living in a boarded up mansion, soon with others joining them.  Little does Jim know, that one of his fellow residents is the actual owner of the home, living incognito.

For a free printable of a quote from this movie, click here.

Based on a Damon Runyon short story, Bob Hope stars in this Christmas comedy with a heart.  Hope’s character, the Lemon Drop Kid, accidentally ends up owing a mobster $10,000, that is due by Christmas Eve.  To raise the funds, the Lemon Drop Kid tricks his friends into dressing as bell-ringing Santas, convincing them that they are collecting money for the “Nellie Thursday Home For Old Dolls”. In addition to the witty Bob Hope one-liners, listen for the very first performance of the holiday classic “Silver Bells” performed by Hope and Marilyn Maxwell.

This quick-paced comedy stars Monty Wooley (also seen in The Bishop’s Wife) as radio personality Sheridan Whiteside, and Bette Davis as his assistant.  Whiteside, while visiting in Ohio, slips on the ice of the Stanley home (Mrs. Stanley is played by Billie Burke who was Glinda in The Wizard of Oz) and becomes their unwelcome houseguest. Check out the live penguins, too! 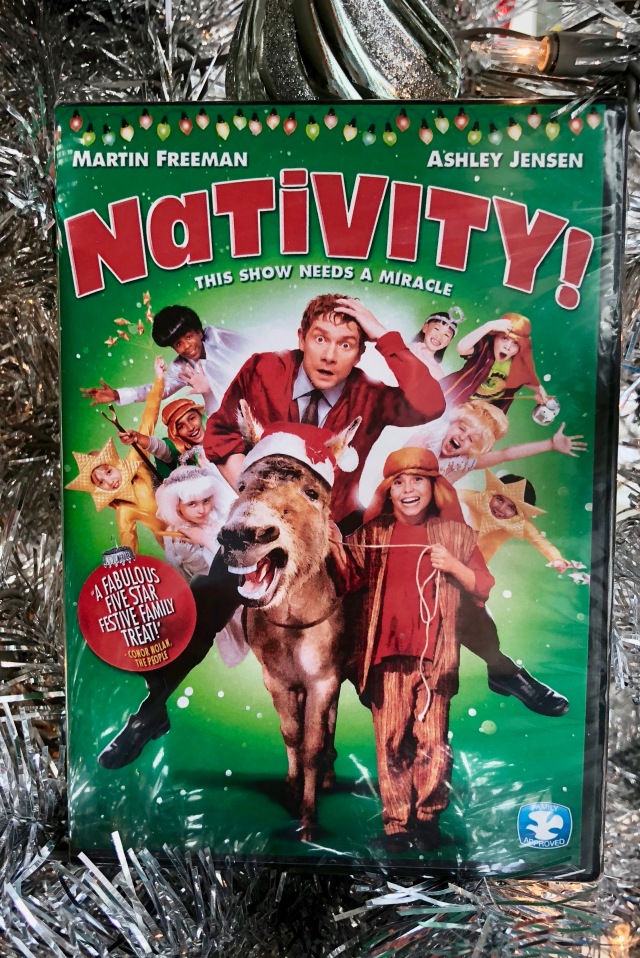 If you haven’t seen this, the newest film on this list, I highly encourage you to do so! This British film is a fun one!  Martin Freeman ( of The Hobbit ) stars as Paul Maddens, a melancholy elementary teacher, who is strong-armed into heading up the annual Christmas play. Things get out of hand when Mr. Maddens lies to an old college chum, stating that Hollywood is going to film his Christmas play. 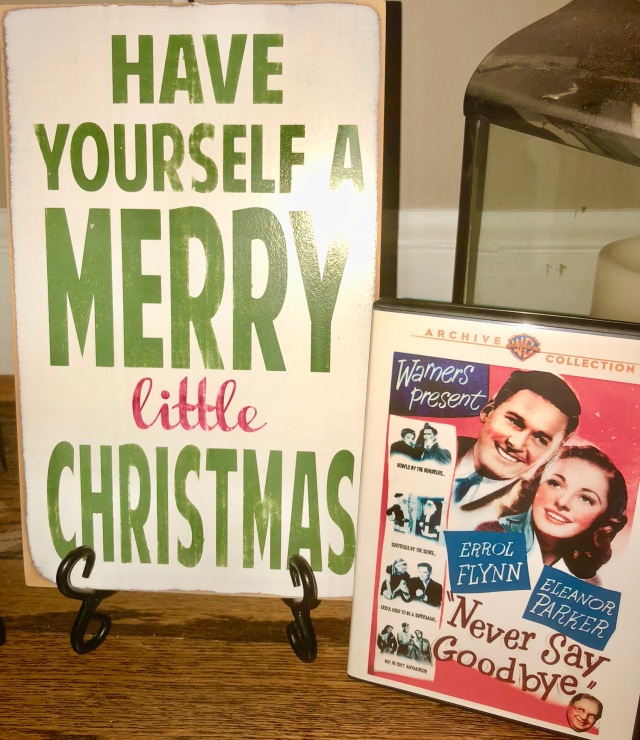 Although rarely acknowledged among holiday films, this one should be!
Errol Flynn and Eleanor Parker (Years later, she would play Baroness Schraeder in The Sound of Music) play a divorced couple and parents of  young”Flip” (played perfectly by Patti Brady), their daughter. Errol Flynn is wonderfully cast as the charmingly doting father, and looks good in a Santa suit. :o)  Listen for an uncredited voice-over by Humphrey Bogart, as Flynn’s character takes a turn at being a tough character. S. Z. (Cuddles) Sakall from Christmas in Connecticut also stars.

Enjoy additional Christmas posts from my past blogs, below.
To read, just click on the blog title.

Thanks for reading,
Annette

To enjoy any, or all, of my past blogs and photos, click here, or go to imannette.net, selecting the posts that you desire to see in the Recent Posts, or “search” in the Archives sections, on the upper right-hand side.

I’m Annette usually posts every other week.  Due to the Christmas holiday season, however, look for my next blog post on Thursday, January 9.

Want to be an I’m Annette follower?  It’s easy!!!
Receive my blog via email, FREE, yes FREE, immediately upon posting.
Sign up now, on the right-hand side of this page, or click here. 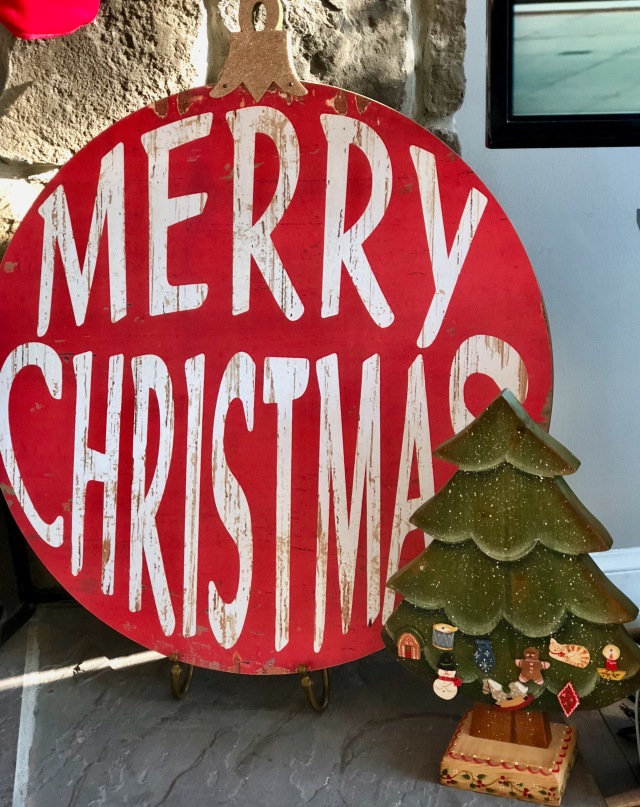 My newest Christmas decor acquisition is this oversized Merry Christmas ornament. I must admit, this was an impulse buy at our local Pier 1.
Hey, it WAS on sale. :o)
You can find it here, or a similar one here.
The handmade advent tree, next to the sign, has been part of our Christmas decor for
many years.