I enjoy the rooftop view from our hotel in Istanbul.
July 2015

I have a confession to make. My house is a mess!  Two and a half years of shuttling back and forth overseas, and now recently moving back home, has taken its toll. Frankly, it has left my usually tidy abode in a state of disarray, and finds me transfixed in a sea of overwhelmedness (Yes, that IS a word. I just made it up. :o))

More on our move home, life abroad, etc. in a future post,
or as the Wizard of Oz’s Wicked Witch would say,
“All in good time my little pretty, all in good time.”

For now, I will crawl into the relative safety of my, somewhat organized, blogging world.  (In other words, I choose to procrastinate.), and regale you with a tale of our recent Istanbul adventure, far from the disorder that currently surrounds me.
And of course, with an iced tea in hand.  :o) 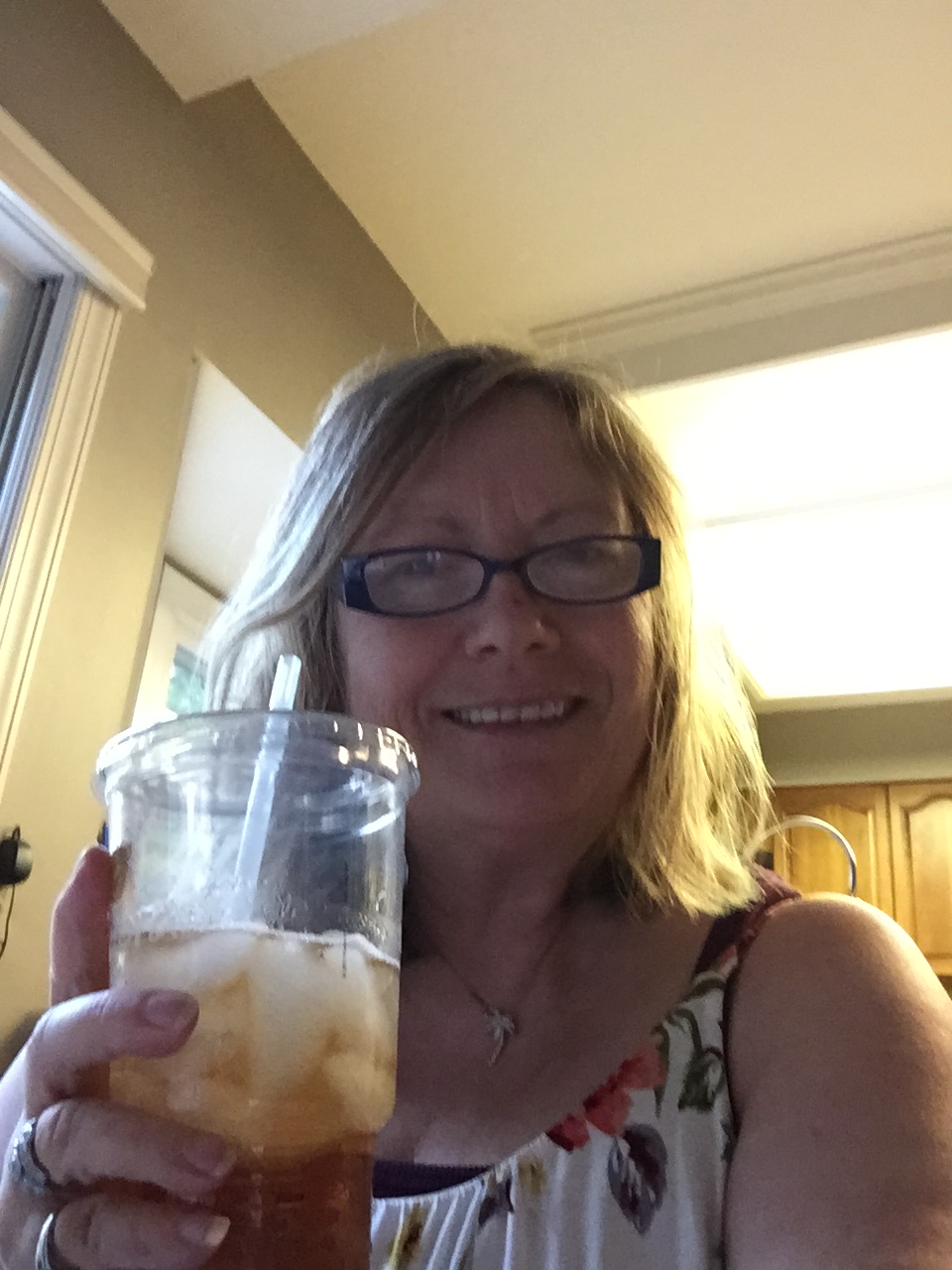 Istanbul, the Ataturk Airport that is, has become a familiar layover stop for Dale and myself over the past few years. I am not just sure how many times we were there, coming from overseas, or going home, every few months, but we know it well. 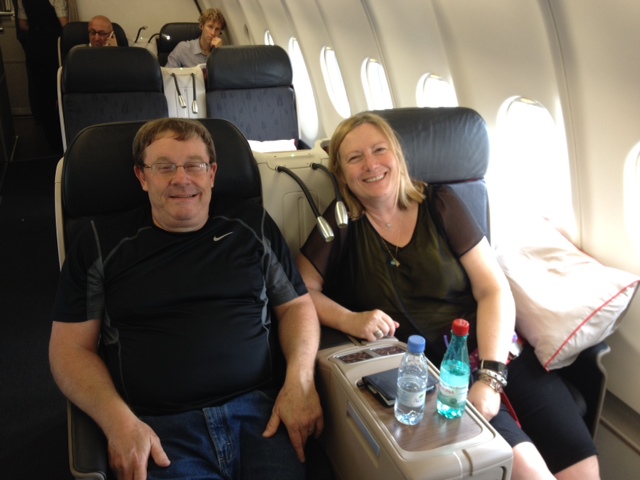 Dale and I, on one of our numerous overseas flights that took us
through Istanbul.
November 2013

Each time, we would peer out our plane’s window at the city’s impressive urban expanse, populated by over 14 million citizens. Each time we would insist that on one of our overseas transits, that we would actually step outside of the airport’s confines to explore the City by the Bosphorus, where part of Istanbul lies in Europe and part of it in Asia.

(Just this last month, Turkish Airlines began to offer international passengers a free service, during layover time, where quick tours of the city are provided.
Click here to read more.)

Looking out of my airplane window at the vast city of Istanbul,
just prior to landing.
May 29, 2015

Enjoying a Turkish Sesame Bagel, crisp on the outside
and soft on the inside,at the Turkish Airline Lounge in Istanbul.
May 18, 2015

This Turkish Lounge chef prepares delicious Turkish Pizza, or pita.
I believe that it is also sometimes called Lahmacun.

The staff kindly gave me this recipe, written in Turkish.
Here is the Google-translated result :
Vegetable Pita Recipe
2 eggplants, 2 zucchini, 1 red 1 yellow pepper them fat brown for thyme and salt mixed cooled parsley are mixed
pita dough in 1 kg flour 20 g salt 20 g yeast 20 g sugar
pita dough is kneaded with half a liter of water
after the presentations are made with basil pesto.

To be honest, except for the catchy 1953 tune Istanbul (not Constantinople)
by The Four Lads (much before my time, of course), I knew very little about this vibrant Turkish city of Istanbul. (In 1930, Constantinople officially was renamed Istanbul, which is what this silly song is about.)
After two fun-filled days, however, I now have an appreciation for some of what beautiful Istanbul has to offer. 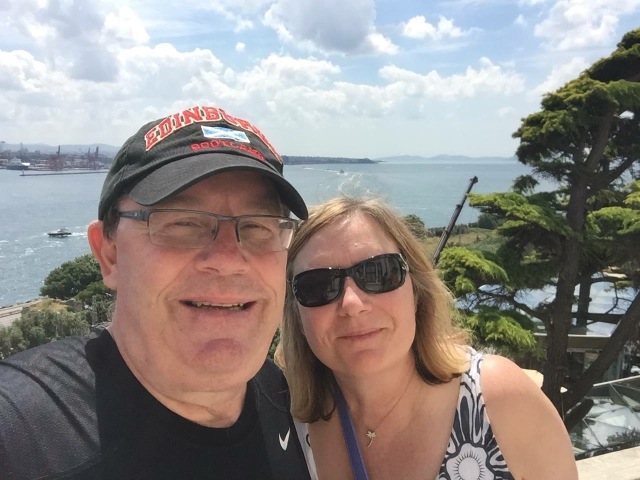 Dale and I enjoy the view from Topkapi Palace.

To listen to the hit Istanbul (not Constantinople), click here.

Thanks to the recommendations of several friends, who had been to Istanbul before us, and a kind Turkish passenger who Dale befriended on a previous plane trip, we were well informed on lodging options and things to see here. (Thank you! You know who you are. :o)) Dale and I opted for the wonderful Four Seasons Hotel, Istanbul at Sultanahmet, celebrating our return home. It was the perfect choice, and also the perfect location, within walking distance to the Istanbul sights that we looked forward to seeing.

I stand outside of the beautiful
Four Seasons Hotel, Istanbul at Sultanahmet.
At one time this beautiful hotel was once the Sultanahmet Prison!

Dale and I were delighted to find this view outside our hotel window;
the Hagia Sophia with protected Roman ruins in the foreground.

Please join me on a brief photo tour of our trip, touching upon the highlights of our Istanbul experience.

First on our list of Istanbul sights to visit, was the Blue Mosque with its six minarets (towers). We visited this landmark twice. Visitors of all faiths are welcome to enter here, even during prayer times. All are asked to remove their shoes, and scarves are provided for women visitors. (I brought my own socks and scarf.)

The Blue Mosque, so named for the blue tiles within,
is a famous Istanbul landmark.

I explore the architecture of the massive Blue Mosque,
being mindful that my hair and shoulders are covered.

Built in the 6th century, The Basilica Cistern, once provided water for Istanbul. This underground locale was also one of several Istanbul locations in the 1963, James Bond film, From Russia with Love, starring Sean Connery. 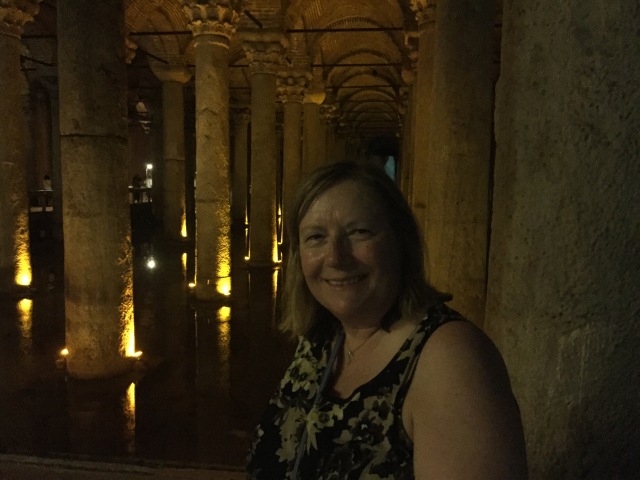 I visit Istanbul’s Basilica Cistern, just like in a James Bond film, in July 2015.

For more Istanbul locations featured  in
To Russia with Love, check out this post.

Constructed from 532-537 (In other words, this museum is very old!) the Hagia Sophia served as a Greek Orthodox cathedral, and later a Roman Catholic cathedral.In 1453,  the Ottoman Turks overtook Constantinople  and converted the cathedral into a mosque.
In 1935, Hagia Sophia became a museum of the Republic of Turkey. 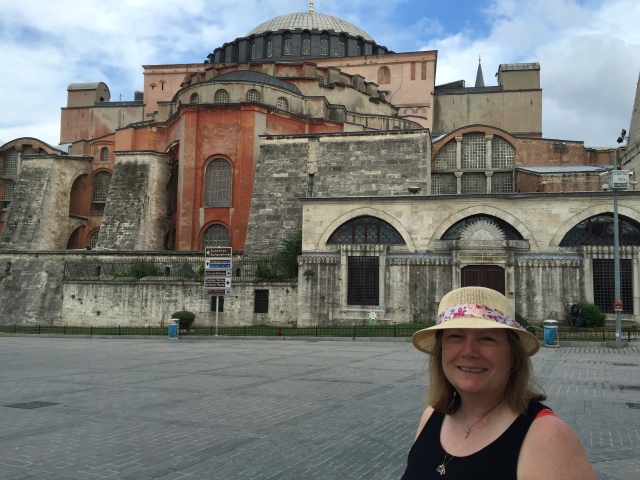 I stand outside of the Hagia Sophia. 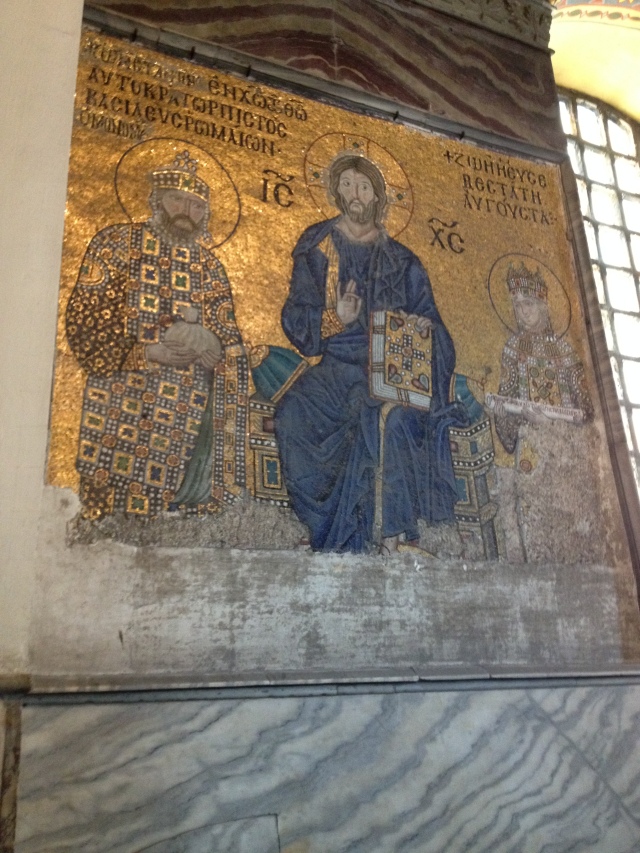 These mosaics beautifully shimmer in the light.

Dale and I enjoyed a leisurely and inexpensive hour and a half cruise on the
Bosphorus Straight.

It was a beautiful day for a cruise. 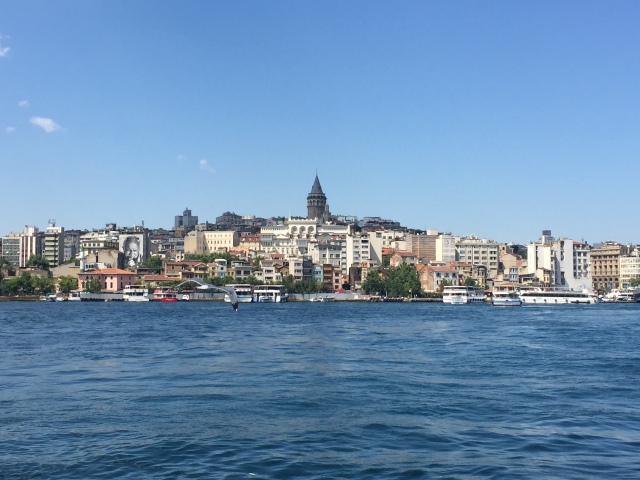 The sights were many on our relaxing trip.
Can you spot the seagull that flew into the photo?  :o)

Dale and I found the Taskim Square area bustling and energetic.

Monument of the Republic sits in Taskim Square. 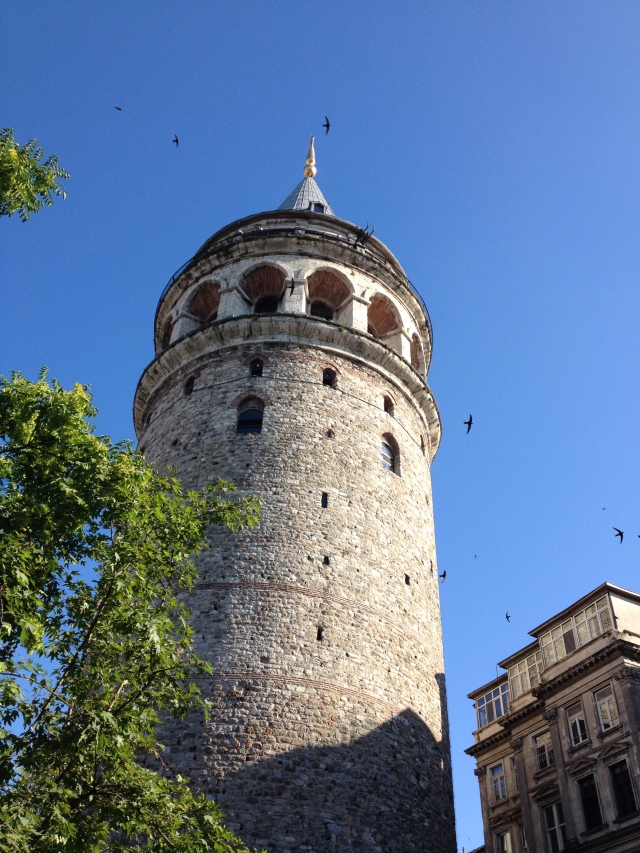 This photo of Dale and me in front of Galata Tower was taken by an Iowa teenager walking by, who was visiting Istanbul with his family!
( I grew up in Iowa!)

The streets near Taskim Square were decorated for the month of Ramadan.

Just outside of the Blue Mosque sits the Hippodrome area.
This was once Constantinople’s sporting area for events, such as horse and chariot races.

The Obelisk of Theodosius was built in the 1400’s BC. and was moved to Constantinople in the 300’s AD.  It was originally taller than it is now.

The pedestal depicts an emperor giving a laurel wreath to the winner of a game.  This base was discovered buried in dirt in the 1890’s.
It had been buried over time .

For a good write-up about the Hippodrome, read this blog post.

I first became aware of the Topkapi Palace and it’s “crown jewel” via the 1964 movie, Topkapi.  Although, I am not a big fan of the film, I became mesmorized by the Topkapi Dagger featured in the movie.

Visiting the Topkapi Palace allowed me to see the dagger in person, as well as the fourth largest diamond, the Spoonmaker’s Diamond.
To view these jewels in a short video, click here.

Topkapi takes place in Istanbul.
Originally released by United Artists, it is now available on dvd, and is occasionally shown on Turner Classic Movies.
The emerald encrusted dagger is the true star of this film.

I stand at the grand entrance of the Topkapi Palace Museum,
from the 1400’s to 1856, the royal residence to the sultans.

Stepping inside, the Topkapi Palace doorway frames the Blue Mosque. 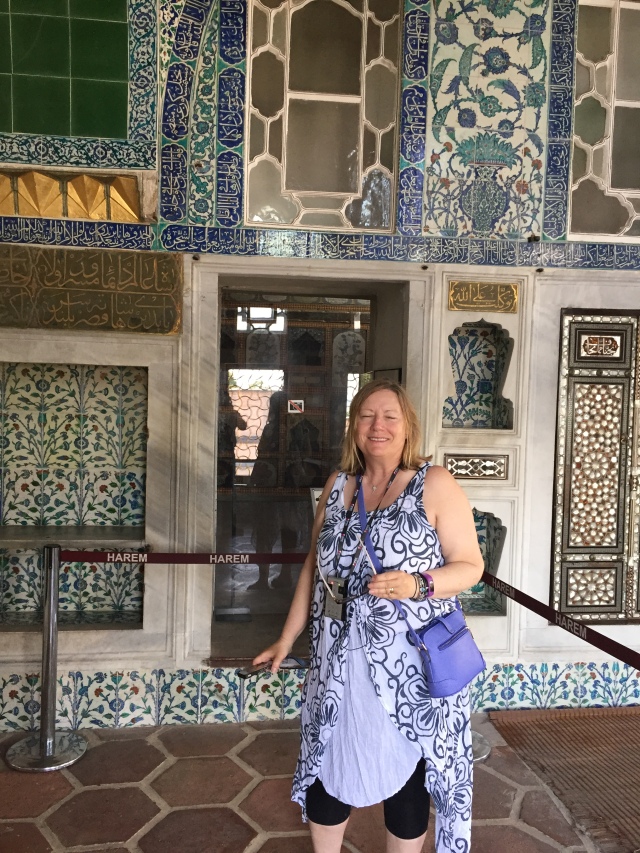 The ornate tile work was evident throughout the Sultan’s Harem section of the Topkapi Palace.

To hear a brief description of life in the harem at the palace, click here. 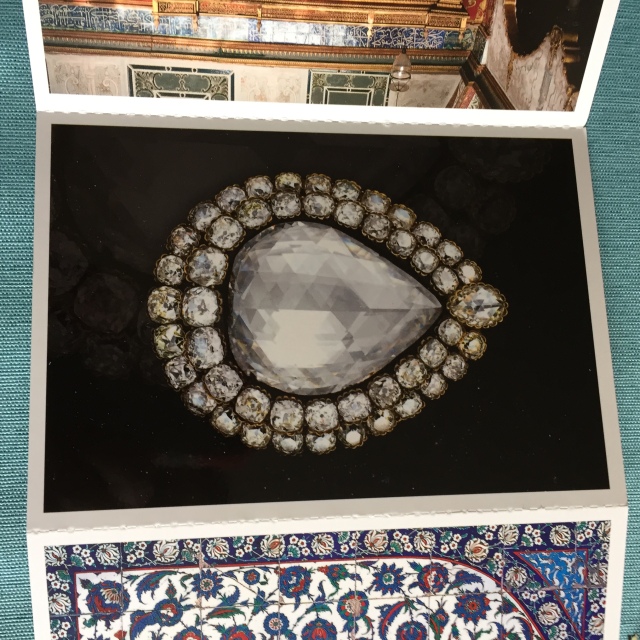 Bathed in dark light, and photography forbidden, I bought these post cards of
the famous Topkapi Dagger and the 86-carat Spoonmaker’s Diamond.

Overlooking the Bosphorus, the Topkapi Palace has spectacular views of Istanbul.

With just hours to spare before heading to the airport for home,
Dale and I took a quick run through the
Istanbul Archaeological Museum.  There are some really old things there! 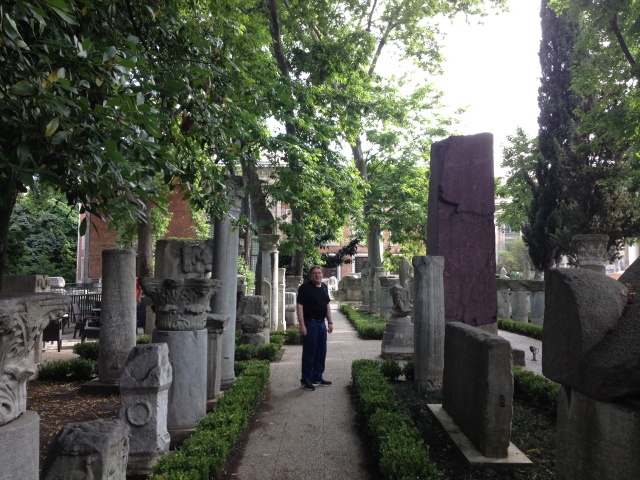 Dale stands amoungst the impressive collection of artifacts that reside in the outside area of the Archaeological Museum.

The inside exhibit includes this early Roman statue of Poseidon,
from around the 1st century.
(There is actually a lower portion of this statue,
but in keeping with this blog’s PG rating….:O))

The Shopping and Dining

“Catering” to its tourist industry,  Istanbul had plenty of places to shop and dine (catering-dining, get the pun? :o))

The Grand Bazaar
In all honesty, Dale and I found this famed tourist destination less than stellar.
After a quick 20 minute look-around, we were looking for the exit.
The Grand Bazaar had the feel of a giant flee market. 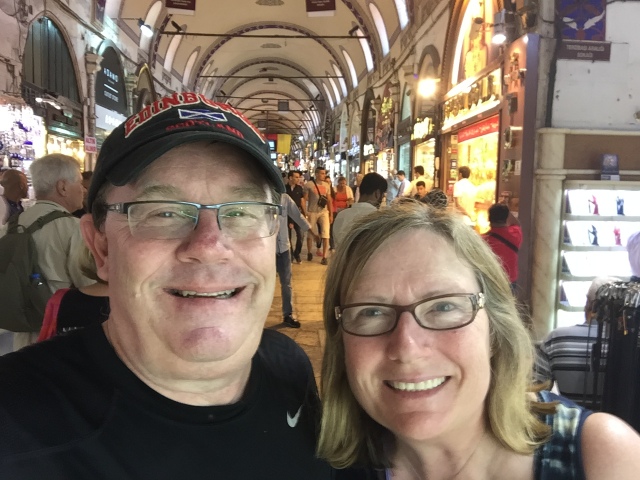 Dale and I stroll the historic Grand Bazaar . 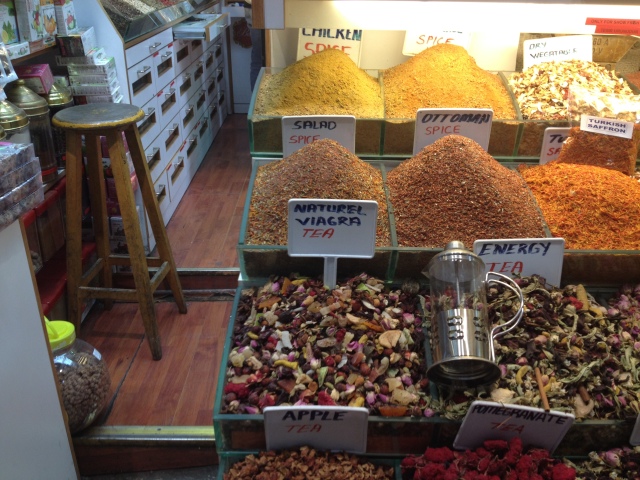 We found the spices and tea for sale interesting, especially the one to the
left of the tea pot. 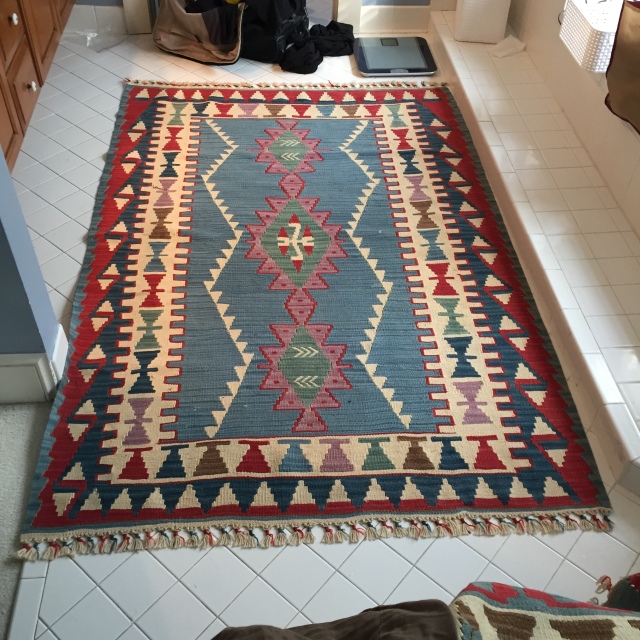 One, of the two, lovely wool Kilim Turkish rugs that we purchased from Herke Hali  in Istanbul.
In Istanbul, beware of “friendly” strangers who approach you!
We had a rug salesman begin following us around
and then invite us into his rug shop for tea.
We did look in his shop, but did not buy anything.

Dale and I went back to our hotel concierge and asked for a recommendation for a reputable Turkish rug dealer.  The hotel uses and highly recommends
Herke Hali.
We bought two rugs from Herke Hali for the same price that the first merchant was asking for just one rug.

I sit with two employees of Herke Hali after purchasing our rugs. 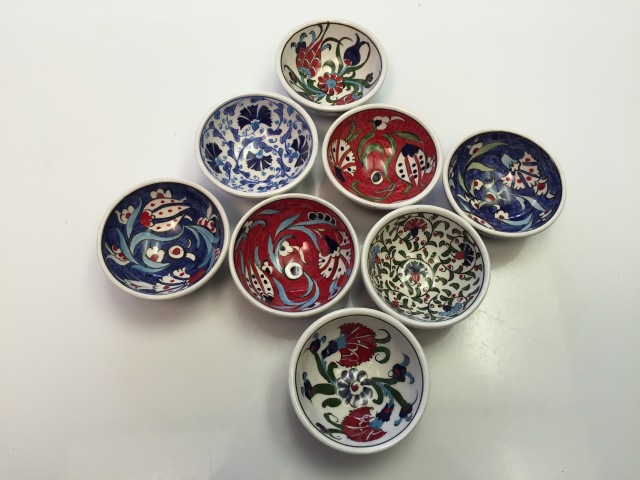 Another recommendation by our hotel concierge was for a reputable pottery merchant, (some pottery is machine reproduced, yet passed off as handmade)
Iznik Classics.
I got these fun little bowls.

Not all pottery is safe for food, so I was happy to find these.
They are even dishwasher (but not microwave) safe!

I love jewelry, and I often buy jewelry as a souvinier from where I have been.  I found this cute little jewelry shop in the Galata/Taskim Square area of Istanbul.  I bought a wonderful and unique pair of earrings there, and upon purchasing them, I found out that the owner of the shop, was also the designer and creator of my souvenir!

Petra Designs, my new favorite jewelry store in Istanbul!
The owner and designer playfully poses for a photo.

Here is just a sampling of some of the delicious food that we ate in Istanbul.

The Turkish Ice Cream, or  Dondurma, differs from American ice cream.
It is thicker and melts more slowly due to the thickening agent made from orchid root.

Turkish Delight is plentiful in Istanbul.
My favorite flavor is orange dipped in dark chocolate. 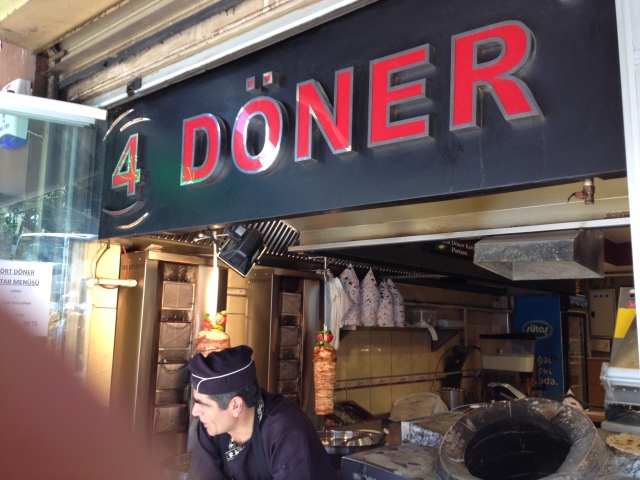 Turkish Tea!
Black tea, my favorite (shown above), and a lightly colored and lightly flavored apple were everywhere, and always served very hot in a tulip-shaped glass .
(I quickly found that holding on to the rim of the glass, not the base, was a must,
to keep from burning my fingers!  :o)) 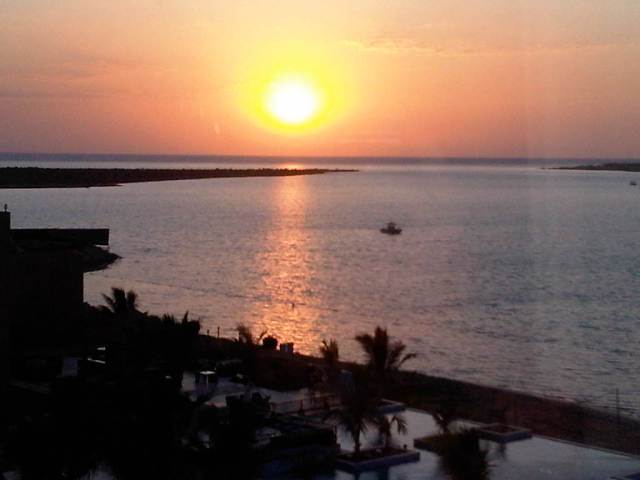 To hear more about Istanbul,check out this video, Rick Steves’ Europe.

Thanks for reading! :O)

I attempt to post my blog bi-monthly, but in the interest of a cleaner domicile…. look for my next post on, or around,
August 30.

A great big thank you to all of my faithful blog followers!

If you are not already an “I’m Annette” blog follower, why not sign up today? You will receive each blog via email, upon publication for free, yes, I said FREE!
Please, sign up on the right-hand side of this page, or go to annettehoffman.wordpress.com

This beautiful flower arrangement greeted us, and bid us farewell,
at the entrance of our Istanbul hotel.

6 Responses to Istanbul in 48 Hour