We’re Off to See the Wizard (of Oz movie)… 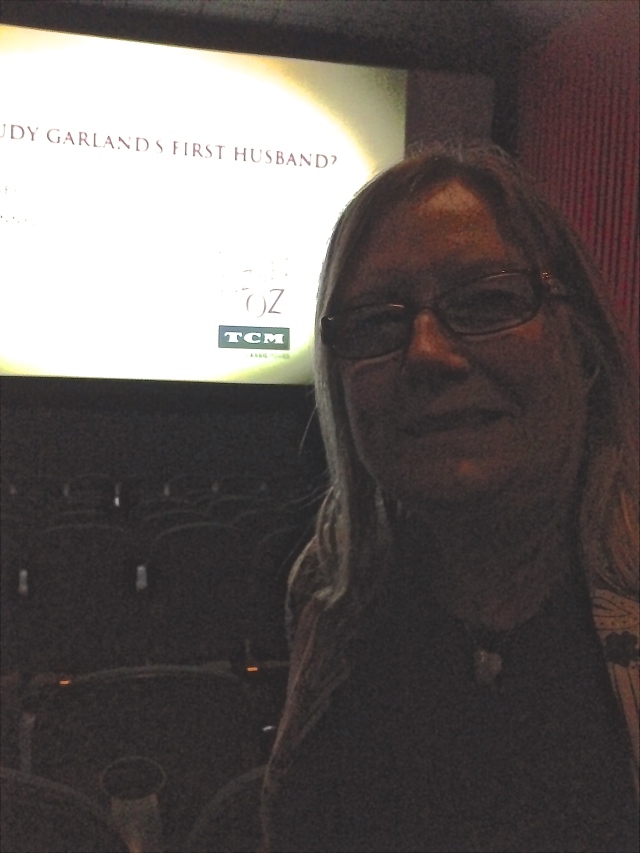 Here I am, very excited to see  The Wizard of Oz on the big screen!

The Wizard of Oz! I love it!  This 1939 movie classic has been a favorite of mine since childhood.  Its annual showing was the high water mark of the kid television world in the 1960’s. Unlike today, where one can watch most any movie with the slip of a dvd into the player, or the click of a computer button, back then if you missed the yearly showing, it was an entire year for a chance to see it again.

It was with excitement that I received Turner Classic Movie’s invitation to attend a showing of The Wizard of Oz on the large screen.  Seeing this ageless movie in an actual movie setting, and upon a big screen, had been on my wish-list for a long time. I quickly bought tickets for the January 14th, evening showing,even bribing (with a promise of movie popcorn and drink) my 20-year old son to go along with me.

Settling into our seats that evening, the previews began, complete with fun The Wizard of Oz trivia questions.

The answer to this TCM trivia question is “B”.

I was giddy with excitement as the credits to the movie began to roll.

Seeing the opening in the original sepia tones. 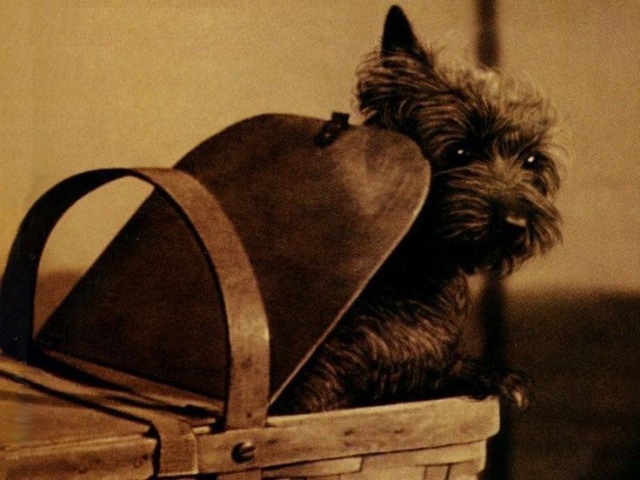 Being a child of the 1960’s (well, actually I was born in 1958), I grew up with black and white television.  Which means that until 1968, when our family bought a color TV set, I saw The Wizard of Oz in entirely black and white.(Just in case you missed it, the beginning of the film is in sepia tones, and changes to color when Dorothy arrives in Oz.) The thing that struck me the most when watching the movie in the theatre that night, was just how vibrant the color in this film is…

The ruby slippers were redder, and sparkled more, 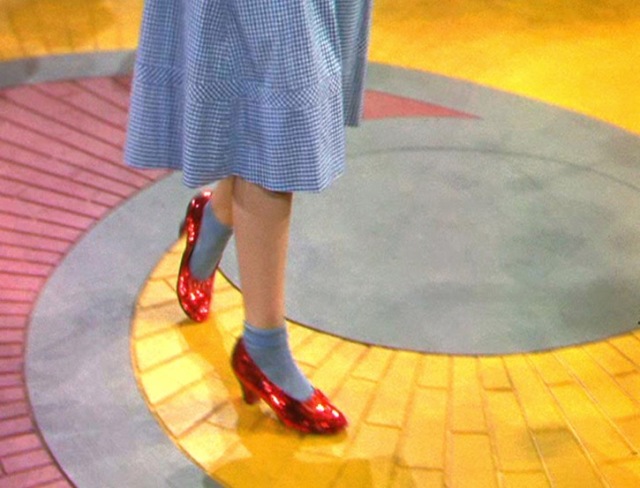 the yellow brick road was a brighter yellow,

Glinda’s dress was pinker and more glittery,
(Fun Fact for Ya- Glinda the Good Witch’s dress was originally worn by Jeanette MacDonald in the 1936 black and white  film, San Francisco. For a clip with a quick view of the dress, click here https://www.youtube.com/watch?v=eNfwV_YF1Aw)
Did you know that Billie Burke was 53 years old when she was given the role of Glinda!

the poppies were more colorful,
(Fun Fact for Ya- The snow used in this scene was 100% industrial
grade chrysotile asbestos! Yikes!)

the Wicked Witch was greener and meaner,
(Fun Fact for ya-Margaret Hamilton, who played the Wicked Witch, was a former Kindergarten teacher.  I found this sweet clip from when she joined Mr. Rogers, in 1975, on his PBS children’s program and discussed her
Wizard of Oz part.
Click on the clip below to watch it.)
https://www.youtube.com/watch?v=u6kpcPD8bks

and the greens of the Art Deco decorated Emerald City were greener.
(Fun Fact for Ya- Judy Garland’s Dorothy was the inspiration for the character of Mary Ann on Gilligan’s Island (1964),
and  The Three Stooges, Curly Howard, was Bert Lahr’s inspiration for the role of the Lion.)

Note-The first two photos in this section were taken at the actual showing of The Wizard of Oz on the big screen,
but the other photos were not.

Things that I Noticed While Watching…

There were a few things that I noticed for the first time, thanks to the
big screen experience.

I could see the lines of the Scarecrow’s face, for the first time.
(The Scarecrow/Ray Bolger’s face make-up consisted of a rubber prosthetic with a woven pattern, like burlap. When filming was wrapped, the rubber piece had imprinted a pattern of lines on Bolger’s face, that took over a year to disappear.)

I saw a gold item in the castle scene, just after Dorothy and her friends find themselves in the poppy field.
The Flying Monkey hands it to the Wicked Witch.
(After some research, I found that this object is the magical Golden Cap from L. Frank Baum’s first Oz book , The Wonderful Wizard of Oz, published in 1900. The cap has special powers, which allows whoever is wearing it, to summon the Oz’s Flying Monkeys.
The other scenes in the movie that refer to the Golden Cap were deleted. )
http://oz.wikia.com/wiki/Golden_Cap
http://en.wikipedia.org/wiki/Winged_monkeys

The Scarecrow is carrying a pistol when they are in the Haunted Forrest.

And I wondered, just who was Nikko mentioned in the ending credits?
It seems that there was some mild controversy among
The Wizard of Oz fans about the true identity of Nikko.
Was he the Head Flying Monkey,
or the Captain Winkie of the Wicked Witch?
My research revealed that Nikko’s identity is that of  the head
Flying Monkey.
The name Nikko, coming from the name of a Japanese town which has a shrine for the famous Hear No Evil/See No Evil/Speak No Evil monkeys. 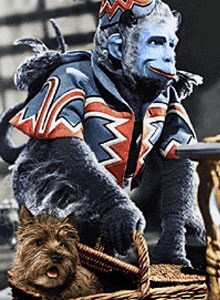 Pat Walshe, the Flying Monkey, was an actor from Vaudeville days.
http://www.imdb.com/name/nm0909930/bio?ref_=nm_ov_bio_sm 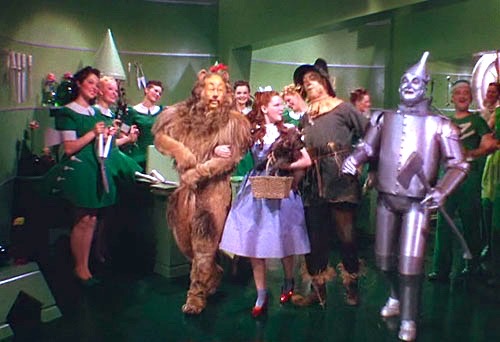 Much of the information in this blog post came from my personal knowledge, or the website below.
For more fun facts, click on it below.
http://www.imdb.com/title/tt0032138/trivia
and
http://www.oscars.org/collection-highlights/wizard-oz

One more piece of The Wizard of Oz trivia:

When Jack Haley played the Tin man, he used a falsetto voice throughout the movie.

My personal favorite of Dorothy’s special trio is the gentle Tin Man.  He seems so sweet and caring, plus I love his costume!

Who is your favorite of Dorothy’s three friends, and why?
The Scarecrow?
The Tin Man?
or The Cowardly Lion?
Please, answer in the comments section below.

Thanks so much for reading! :o)

A big thank you to all of my faithful blog followers!!!

It is my hope to boost my follower numbers this year, so….

Please, pretty please, become an “I’m Annette” blog follower. By doing so, you will receive “I’m Annette” via email, FREE, yes FREE, immediately upon posting, sign up on the right-hand side of this page today. :o)

I enjoy the Ruby Slipper’s display at the Smithsonian in Washington D.C.
December 2008
http://americanhistory.si.edu/treasures/wizard-of-oz

At the Smithsonian Institution, one pair of ruby slippers used in the filming of The Wizard of Oz is a popular display, so popular in fact, that the carpet immediately in front of the shoes has had to be replaced several times.
It is rumored that this pair of shoes is not a matched set!
http://www.imdb.com/title/tt0032138/trivia

8 Responses to We’re Off to See the Wizard (of Oz movie)….