Looking forward to a delicious meal at Paula Deen’s,
The Lady & Sons restaurant, in Savannah,

My love affair with Savannah, Georgia began in the late 1970’s. My first meeting with this charming city, resplendent with its beautiful architecture steeped in history, and filled with numerous delicious Southern restaurants, drew me in back then.

I still love this place. So, in February, when my three house guests suggested that we take a Savannah day-trip, I was in!

(Don’t miss the photo at the very bottom of this post from my 2011 Savannah visit.) 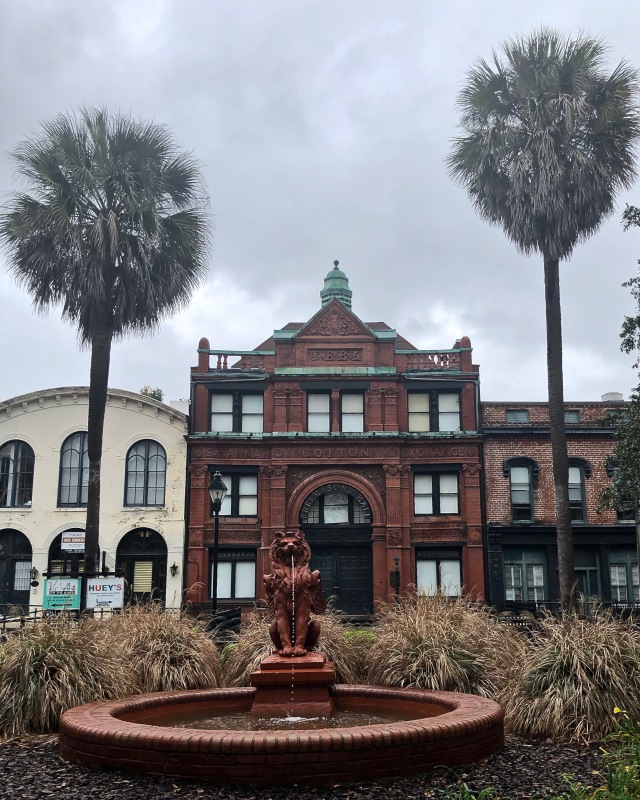 A griffin/winged lion statue fountain “guards” the building.
Read about the griffin’s/winged lion’s unfortunate “injury” in 2008,
here, here, and here.

As we headed out on our day-trip journey, I was thankful that my cousin had volunteered to drive, especially since we would have to drive over the very tall Talmadge Memorial Bridge to get to Savannah. (Yes, I admit, I am a Grade-A chicken!)

A long view of the Talmadge Memorial Bridge from our parking garage in Savannah.

One of the first sights to greet us upon driving into Savannah was this cool 1960’s retro sign for the Thunderbird Inn. Their hotel web site states that popcorn greets each guest, that each room is supplied with complimentary Moon Pies and RC Cola (Very Southern!), and that The Jackson Five once stayed here ! This place looks fun!

This retro Thunderbird Inn sign was one of the first things that we spotted while driving into Savannah.

Thank you, Katie, for the use of your photo!
(It was raining the day that we passed by.)

Down By the River

Peering through the fence at the Savannah River,
and the River Street shopping area.

A freighter eases by in front of us.

We had fun exploring Savannah’s River Street and its shop.  Being a real foodie, I pretty much only took photos at the Savannah’s Candy Kitchen.  I couldn’t help myself, as there were so many delicious things to choose from.

If you have a sweet tooth, Savannah’s Candy Kitchen has you covered!

Caramel apples and blinged-out chocolate-covered Rice Krispie treats were among the many sweet (yes, that was a pun) options. 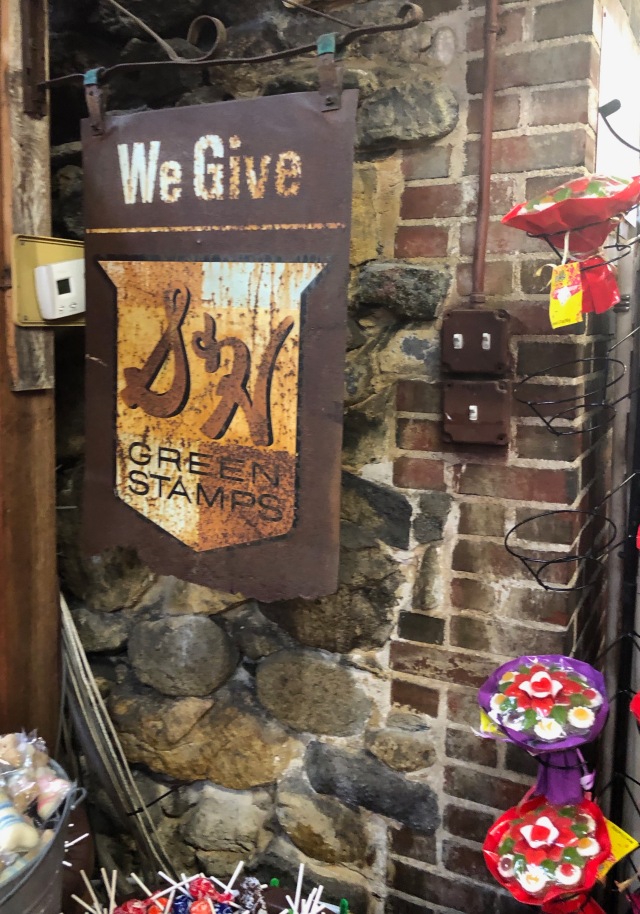 It was fun seeing this old green stamp sign, along side candy bouquets.

Have you seen the Brady Bunch episode (54-40 and Fight) in season one (episode 15), where the kids fight over green stamps? 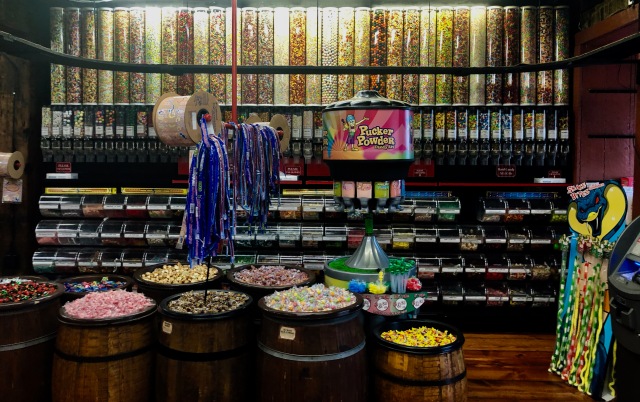 An array of candy choices await! 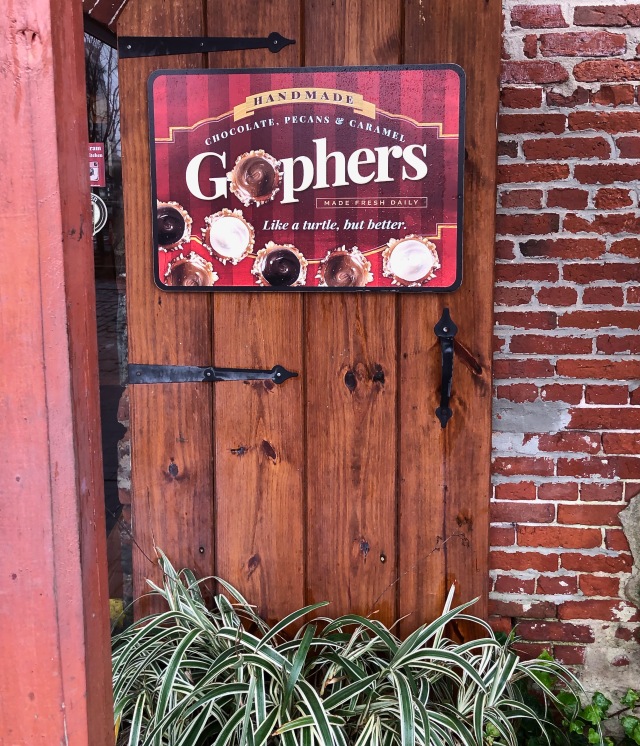 If you are hungry after viewing these goodies, you can go here to order them online. 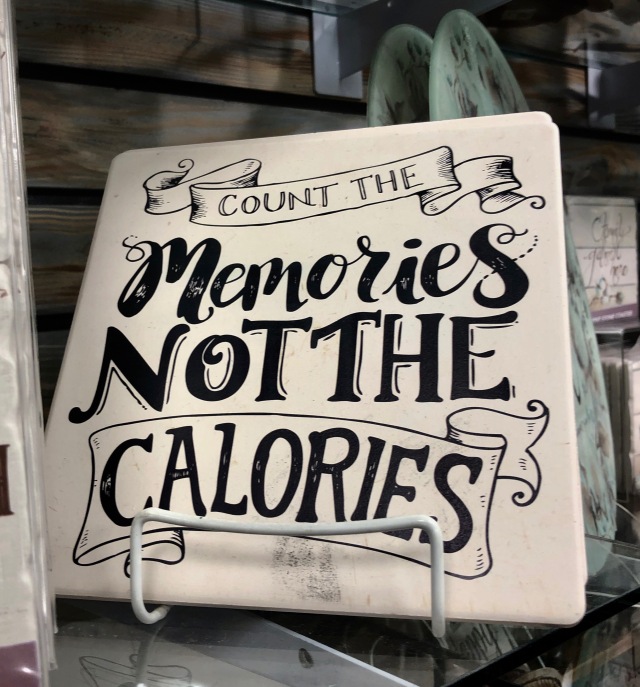 This trivet, for sale at Simply Savannah on River Street,
displays my Savannah day-trip motto!  :o)

We head up to Savannah for the remainder of our day.

Savannah was originally set up in a grid pattern with public squares in each area. Savannah is graced with 22 of these unique and lovely (Park) Squares. Here are some of the squares we enjoyed that day!

John Wesley’s statue, the Methodist founder who spent two years in Savannah,
presides over Reynolds Square.
The square was named after an early royal governor of Georgia. 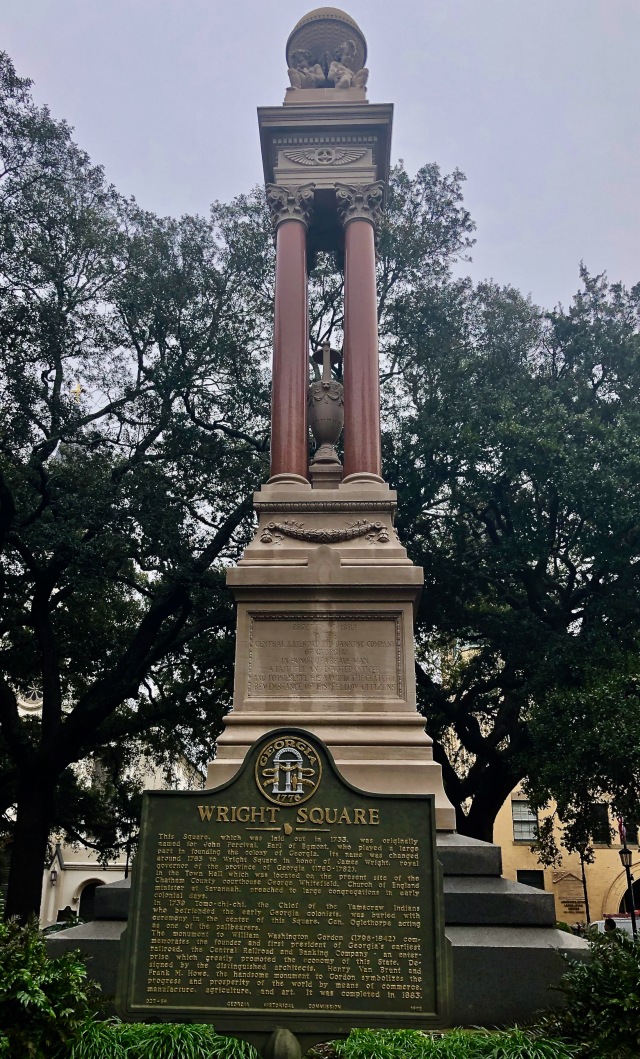 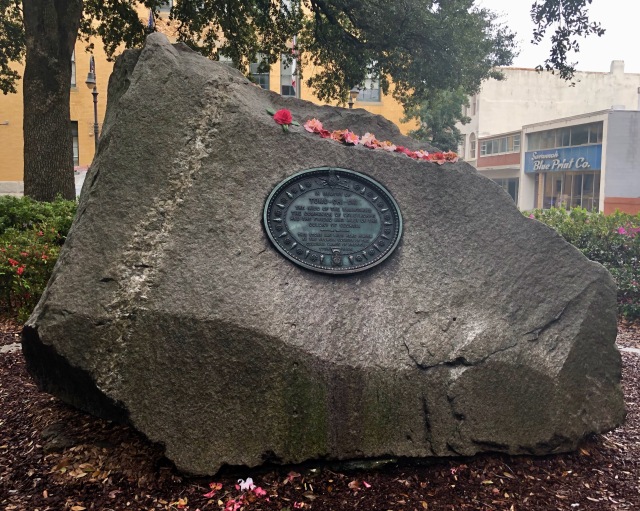 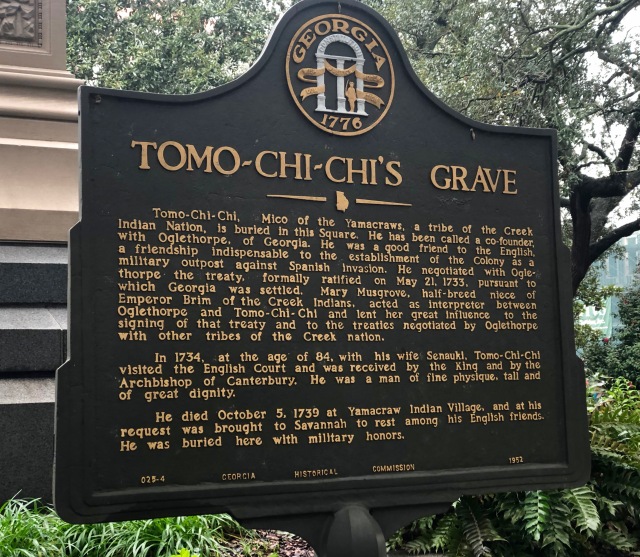 This square is named for an early royal governor of Georgia, but is most notable for the burial site of (Native American) Creek leader Tomochichi.  Tomochichi, was a good friend of Georgia founder James Oglethorpe, and is credited as its co-founder.

I find it interesting that on this plaque’s description of Tomochichi, it mentions that “he was a man of fine physique”! 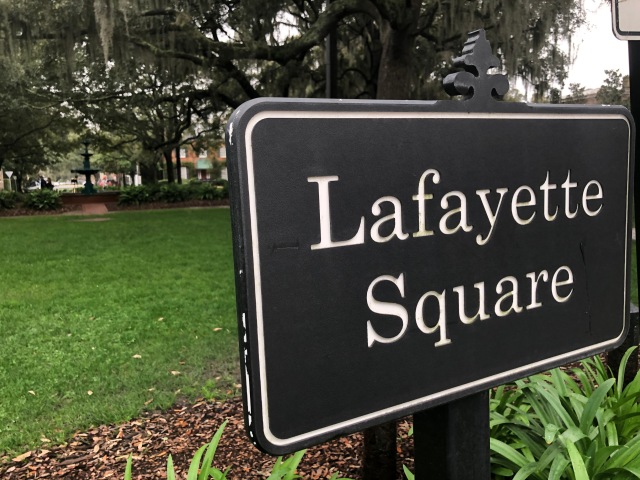 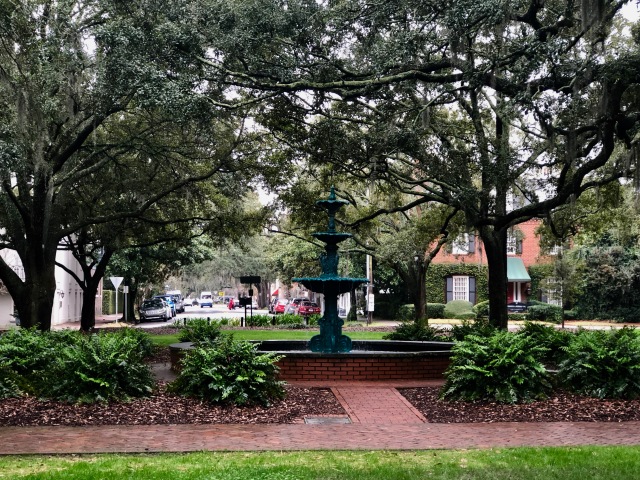 Pretty Lafayette Square, named for the Revolutionary War hero
Marquis de Lafayette who once visited Savannah, has a green fountain as its centerpiece.
The Cathedral of St. John the Baptist (See it toward the bottom of this post)
is nearby.

Named for President James Madison, this square’s statue commemorates the Siege of Savannah during the Revolutionary War. 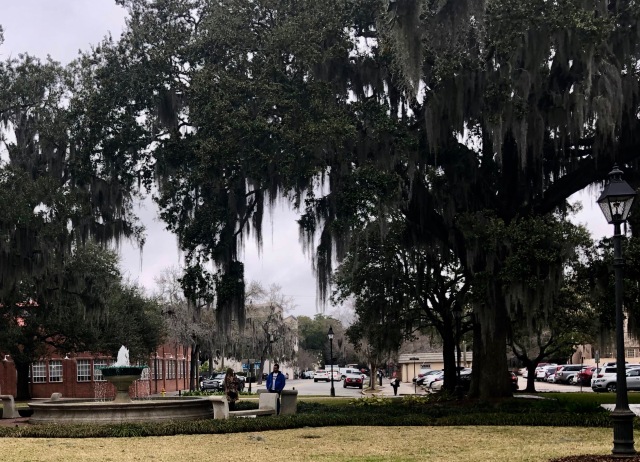 Orleans Square commemorates the Battle of New Orleans during the
War of 1812.  The German Memorial Fountain stands at the center of this square, honoring Savannah’s early German immigrants.

This square is home to a few large live oak trees, draped in Spanish moss. 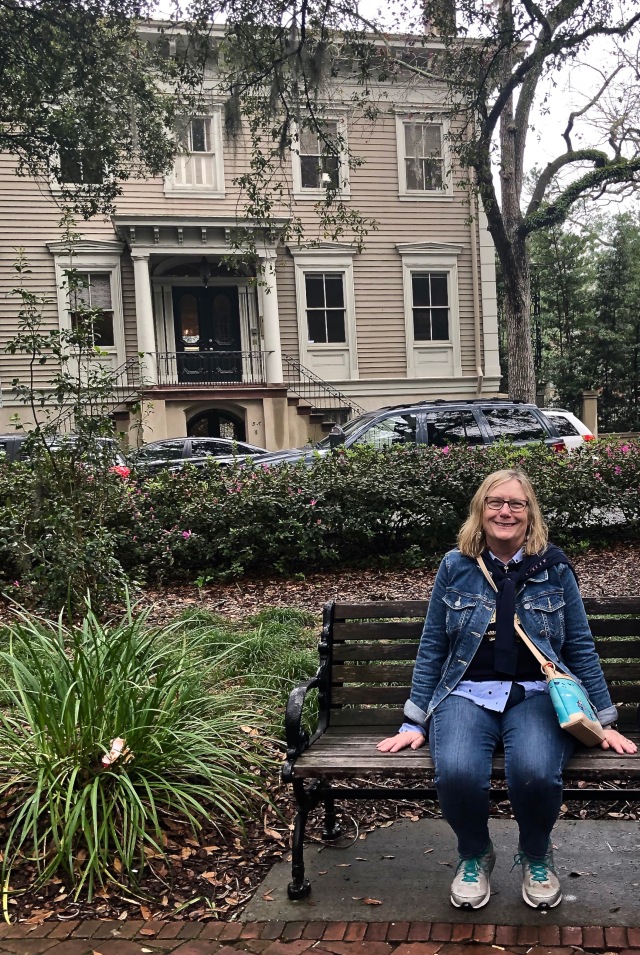 Georgia’s founder James Oglethorpe‘s statue stands tall in Chippewa Square.  The square was named for the War of 1812’s Battle of Chippewa.

This square is a popular tourist stop, having been in a movie!
The “bus stop bench” scene in the film Forrest Gump was filmed at the north end of this park.  The actual bench used, was a movie prop that is now in California.  However, the Savannah Visitors Center has a replica of the bench on display.

I found these wonderful articles about each of Savannah’s Squares, here, here, and here.

My lunch choice for the day, was a trip to Paula Deen‘s restaurant Ladies & Sons.  I had once had the pleasure of dining here (in 2011), and was anxious for a repeat visit to the buffet table.  Happily, the food was as good as I had remembered, with my favorites still being the fried chicken and the mashed potatoes. YUM!

Bring on the buffet!  But first, cheese biscuits, please.

We are all ready to dig in!

The Best Kind of Souvenir

Whenever I travel, or take a special trip, I often look for a souvenir.  That souvenir many times takes the form of an inexpensive piece of jewelry.  Across the street from Lady & Sons is a jewelry store, Metals and Paint, that allows me to indulge my jewelry passion, without breaking the bank.  (This was my third visit to this store, over the years, and my third purchase.). Many of the pieces are made by the owner, Joe, in the shop!

It took my third trip to this store to finally learn its name!

Among the stately buildings that populate Savannah’s architectural landscape, churches play a major role.  We only entered one for a self-tour, but I was able to snap a photo of a couple others, as we passed by. 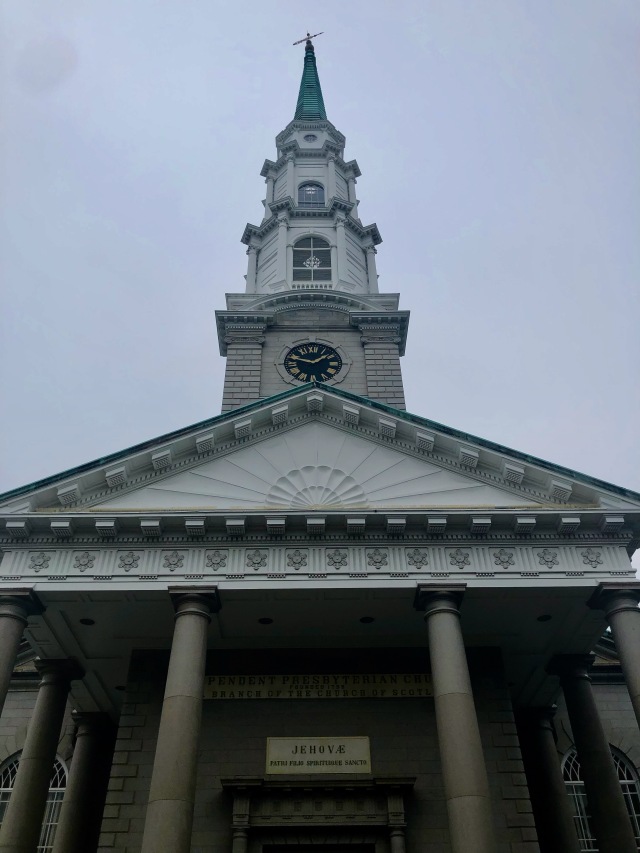 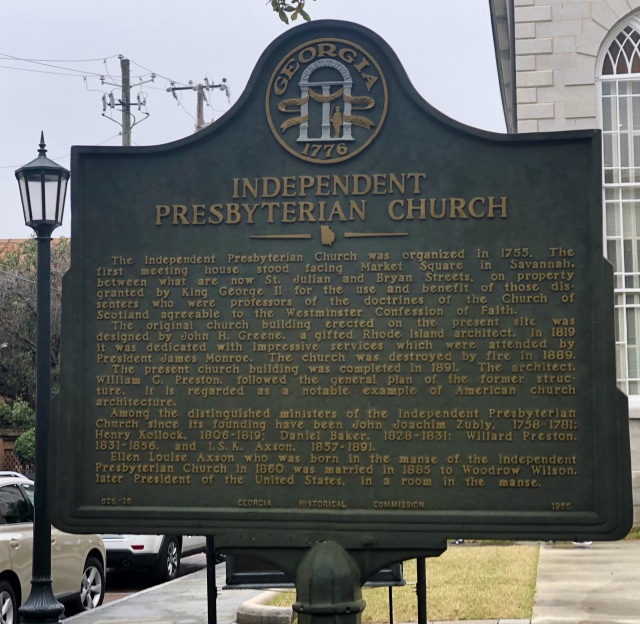 The Independent Presbyterian Church on Bull Street is just one example of
the amazing structures in the downtown Savannah area.

Used as a hospital during the Civil War,  the Lutheran Church of Ascension stands watch over Wright Square.

The Cathedral of St. John the Baptist

The Cathedral of St. John the Baptist was built in the French-Gothic style.
This is the oldest Catholic Church in Georgia.

There are breathtaking views from every angle in this edifice.

Our day-trip was winding down, and we were heading back to our car.  Having spied earlier ( at the beginning of our day), the historic Leopold’s Ice Cream,  I suggested that we make a mini-detour to try it out.

It seems that other people also wanted to check out Leopold’s ice cream!

Co-owner, Mary, sweetly greeted us at the door, apologizing for the wait and thanking us for waiting in line.
Mary even took a moment to chat, and pose for a photo.
Photos on the wall attest to Mary’s husband and co-owner, Stratton’s, Hollywood ties. 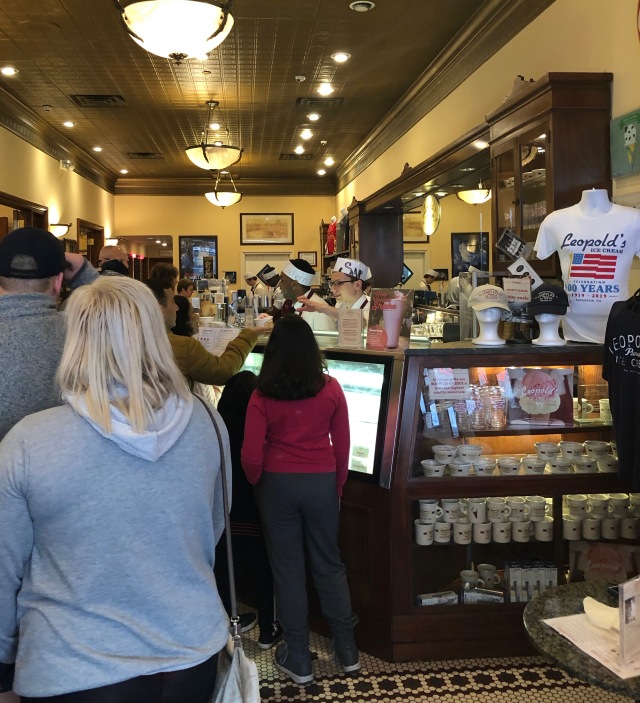 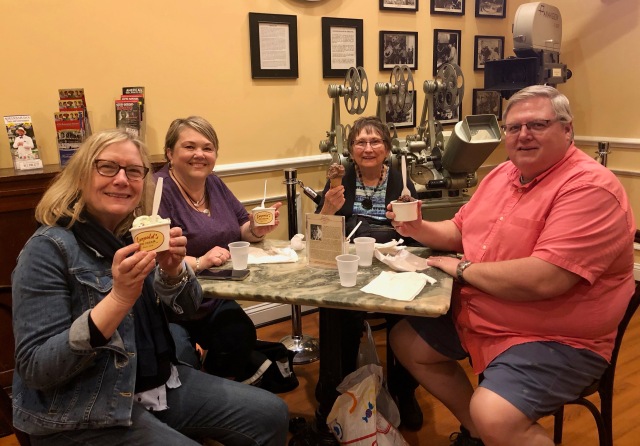 We are all very happy that we stopped in for Leopold’s Ice Cream!
Note the movie equipment/decor behind us.

All the “scoop” on Leopold’s history.

Here are a few items that made me smile this week.  Sharing these smiles with you. :o)

My friend shared this sweet photo of his, virus house-bound,
son video chatting with his next door neighbor friend . :o)

Who Doesn’t Love a Romantic Story?

My British blogging “pen pal” got married this past week, despite numerous Coronavirus obstacles. 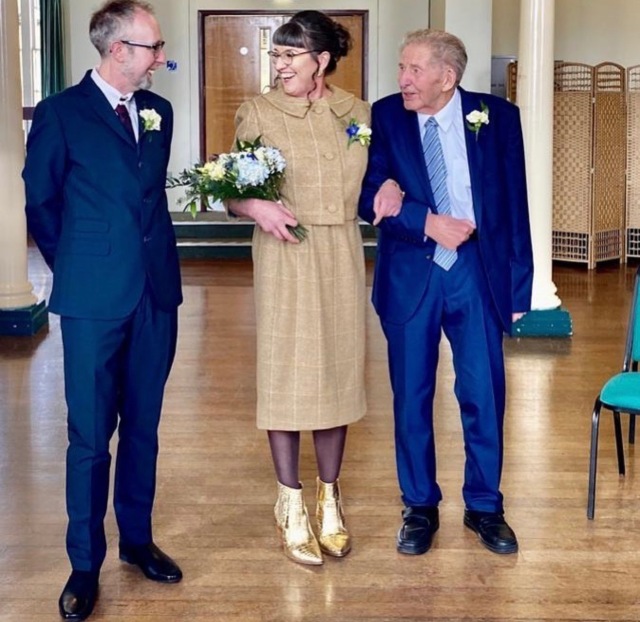 Jenny stated on her Instagram page-
Happy to announce that against all odds I became Mrs. Jenny Rathbone on Friday.  Been on a romantic mini-break in Aldeburgh ever since and every single minute of last 4 days has been magical-if a little surreal… 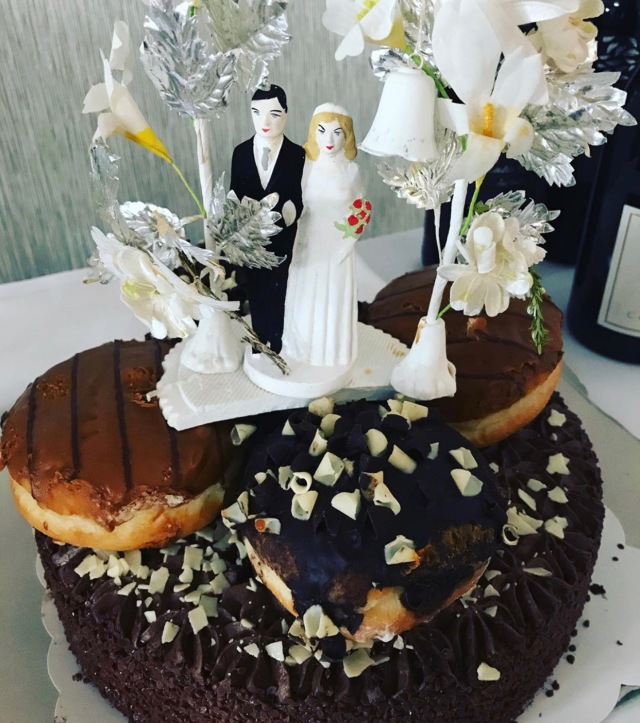 And
My wedding cake was cancelled so here’s the masterpiece the groom and best man made from a frozen chocolate cake from “Iceland” and 4 doughnuts from “Gregg’s”. 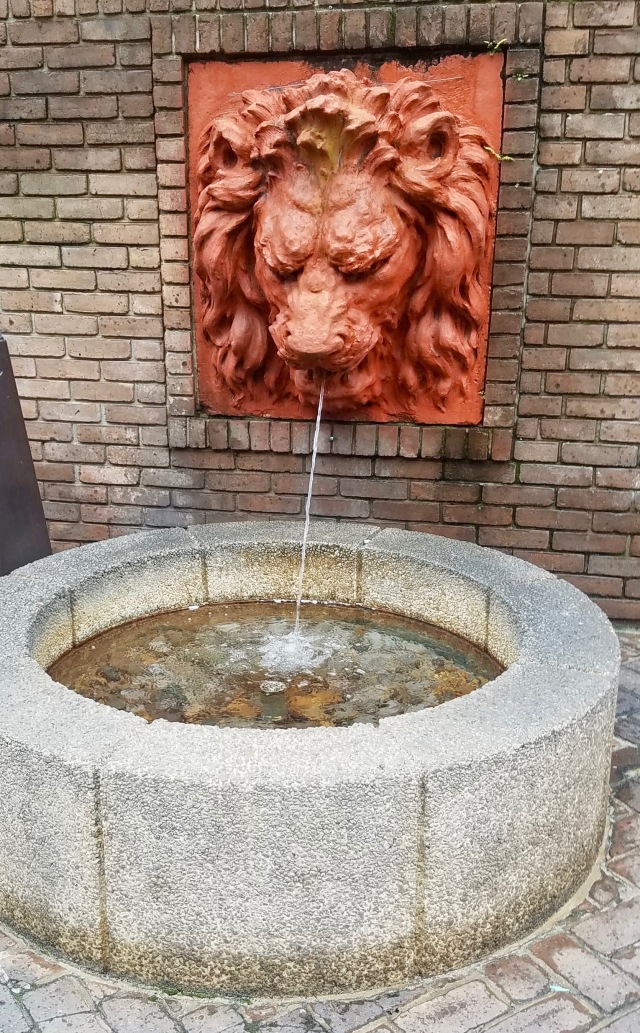 An interesting article on little know facts about Savannah, is here.

Thank you to all who contributed photos for this blog post! You know who you are!  :o)

Thank you for reading!
May your days be blessed, and your taste buds happy!
Stay in and stay safe!

To enjoy any, or all, of my past blog posts and photos, click here, or go to imannette.net, selecting the posts that you desire to see in the Recent Posts,
or you can “search” a topic in the Archives sections, on the upper right-hand side.
(I have been blogging since 2013.)

If you receive my blog via email, and some of the photos do not come through,
please click on imannette.net, or click here to refresh the post.

A pirate (and Johnny Depp look-alike) posed for
this (throwback) photo from Savannah’s The Pirate’s House restaurant.
April 2011

12 Responses to A (February) Day-Trip to Savannah