Happy Not -So- Very- Scary Halloween

Happy Not -So- Very- Scary Halloween 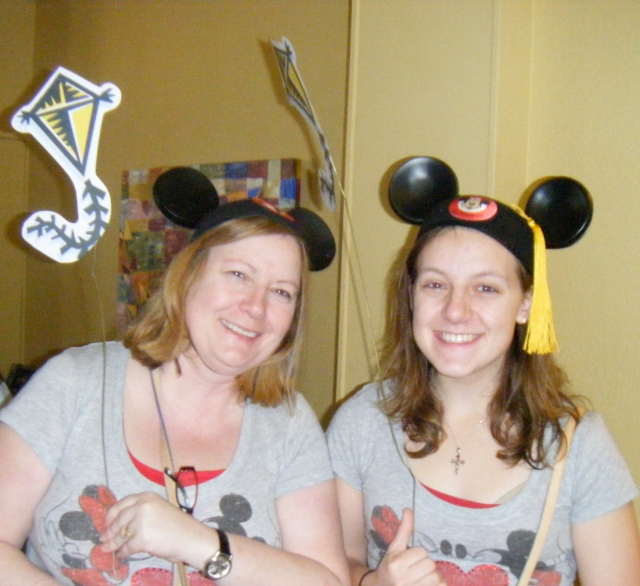 Not actually a Halloween costume, but dressed up for a sorority
look-alike contest with my daughter in 2011.

Autumn is my favorite season, and all that goes along with it:

I have never been a fan of Halloween’s unseemly side, and prefer to focus on celebrating the very American tradition of trick or treating, along with the beauty of the fall season.

Even now that my kiddies are no longer of the trick or treating age, I enjoy the young costumed visitors who knock at my door with an enthusiastic “Trick or Treat”.  This was my Facebook entry from last November 1, 2012.

Had 47 trick or treaters last night from ages 2-13 in an array of costumes, including Charlie Brown, a pink angel adorned in 3 foot feather wings, a fortune teller who predicted that I would give out a lot of candy corn in the near future (the candy corn was a big hit, by the way), a test pattern, a glowing disco ball, and a pillow-stuffed Baltimore Oriole who informed me that his costume represented that he was a big Oriole fan both “literally and “metaphorically “!!! :o)

Just in case you are wondering, the candy corn mentioned was the small, trick or treat sized, pre-packaged variety.

In addition to making sure that the treat bowl is filled with goodies to pass out every October 31, I also like to put my home in a festive mood.  I have a small table in my entryway that changes monthly with the latest holiday/season. For Halloween I try to keep it simple and non-scary. 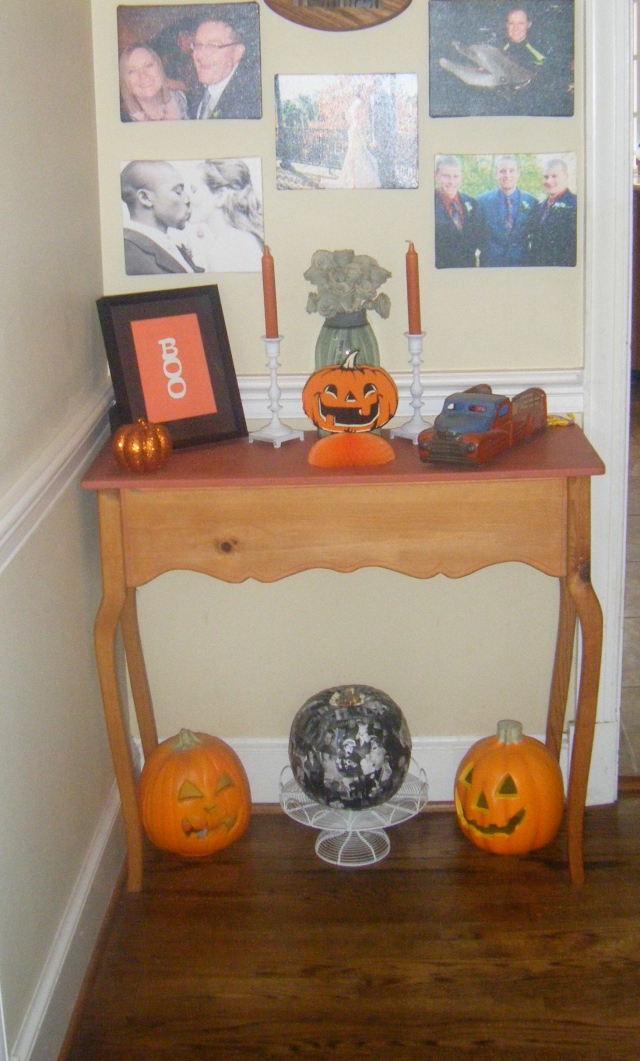 My hall entryway 2011, as scary as my Halloween décor gets.

The “BOO” printable (center left) was thanks tohttp://ginghamcherry.blogspot.com/2009/09/free-prints-love-or-boo.html

My family photo pumpkin (bottom middle, and in photo below),my first attempt at decoupaging an artificial pumpkin,with photo printed copies of past family pictures.
I used Country Living’s instructions below as my guide.

In-between enjoying the trick or treaters on Halloween night, it has become my tradition to watch It’s a Great Pumpkin, Charlie Brown. In fact, there are several “must watch” shows on my schedule to go along with Halloween. I invite you to read through my list below.  You may find one, or two, programs that are new to you, and that you may wish to include in your watch list this year. 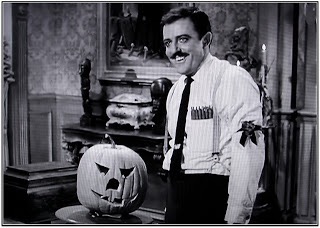 (This list starts with my “must see” selections at the top, descending to the
“if there is time to watch” toward the bottom.)

The Ghost and Mr. Chicken (1966)
No one looks, or acts, more scared than Don Knotts in a haunted house.  Very funny!

Tickle Me (1965)
Elvis in a haunted house, need I say more?
(Julie Adams co-stars in this, and is also in Creature from the Black Lagoon, below.)

Meet Me in St. Louis (1944)
Young Margaret O’Brien steals the spotlight from Judy Garland with her Halloween night pranks.

Mom’s Got a Date with a Vampire (2000)
A Disney made for TV movie that has been a favorite in our family for years.
Charles Shaughnessy, of The Nanny fame, stars as the not overly frightening vampire.

Young Frankenstein (1974)
(Yes, I AM old enough to have watched this film in the movie theater, when it was first released!)
Gene Wilder stars as Dr. Frederick Frankenstein in this comedy classic.

Blackbeard’s Ghost (1968)
Dean Jones, the “face of Disney films” in the 1960’s, stars in this lesser known Disney tale.  All the fun and silliness of Disney films of that era.

For episode details go to

Don Knotts in the precursor of The Ghost and Mr. Chicken

For episode details go to

This is the 1966 color movie based on the TV series.

Any and all episodes

Sort of a ”Leave it to Beaver” but played by friendly monsters.

Starting with the second season, this family series has had an annual Halloween episode filled with laughs.

Bewitched (2005)
First, let me say that this movie got a bad rap when it came out.  I like it, and I think it is cute. Basically, Will Ferrell’s character is going to play Darren in the remake of the classic “Bewitched” TV series, with Nicole Kidman as his Samantha.  Unbeknown to those working on the new show, is that Kidman’s Samantha really IS a witch!

Ghost Breakers (1940) & Scared Stiff (1953)
The first stars Bob Hope; the second, Scared Stiff,  is a musical remake
of Ghost Breakers, but this time starring Dean Martin and Jerry Lewis.
Both are “scary” comedies.

You’ll Find Out(1940)
Another comedy “horror” movie, this time with big band leader Kay Kyser and his band.
This film also stars horror legends Boris Karloff, and Bela Lugosi, plus Peter Lorre!
Just fun, with a touch of scary.

Check out other Abbott and Costello titles for a hint of scariness. :o)

Wizard of Oz (1939)
Because I love to watch this one anytime, and the Wicked Witch, Glinda, Scarecrow,
Tin Man, Cowardly Lion, and Dorothy have become Halloween costume staples.

Batman: The Movie (1966)
Because this is MY blog, after all.
I love the campy Adam West as Batman!
Besides, he is dressed in a costume, as are his trusty sidekick and four criminal foils, right?
This is the 1966 movie based on the Batman TV series.

The Canterville Ghost (1944)
Margaret O’Brien stars again, this time with Charles Laughton as the inept and unscary ghost.

Wallace & Gromit:  The Curse of the Were-Rabbit (2005)
My family are fans of the British claymation characters Wallace and Gromit.  This dog and his master have come up with an animal friendly machine to keep rabbits from eating the community’s vegetables.  All in good fun, keep an ear out for all of the little jokes.

Diary of a Wimpy Kid (2010)
I am a fan of the Wimpy Kid movies.  They make me laugh. This one finds Greg in trouble, as always, including on Halloween.

The Spy Next Door (2010)
Jackie Chan stars as, you got it, the spy next door! I threw this one in, as it occurs around Halloween. Cute family film.

I Married a Witch (1942)
Veronica Lake stars as a beautiful witch, who falls in love with the ancestor of the man who persecuted her in the witch trials. A fun comedy.

If you do not like anything remotely scary, skip past the suggestions below. 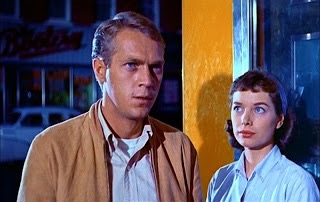 Steve McQueen stars in The Blob

If you desire scarier stuff…

The master of suspense is a great addition to movie watching this month.  Here are a few:

To Catch a Thief (1955)-They wear costumes in this, so, of course, it is perfect for Halloween (May I remind you that this is MY list), and besides, Cary Grant is in this.
This one is not scary.

Rear Window (1954)-Jimmy Stewart is laid up with a broken leg, and, apparently, even the attentions of the beautiful Grace Kelly are not enough to detour him from snooping on his neighbors.

The Birds (1963)-A bunch of birds become hostile in Bodega Bay.

North by Northwest (1959)-Great movie and Cary Grant stars in this. (Not scary enough for Halloween? Again, this is MY list.)

Steve McQueen stars, with a ball of silicone, playing the alien amoeba, that terrorizes his Pennsylvania town.

Creature from the Black Lagoon (1954)

A funny- looking beast becomes captivated by beauty, Julie Adams.  A few years later, Elvis seems captivated, too, in the funnier, Tickle Me.

I Walked With a Zombie (1943)
Val Lewton, known for his horror films, produced this RKO film, and this is the scariest film on my list. A nurse moves to the West Indies to care for a sick woman.
Jane Eyre was the inspiration for this script.

This film can usually be seen on Turner Classic Movies in October.

This film can usually be seen on Turner Classic Movies in October, too.

Humorous Clip of a Halloween

I absolutely, totally hate the yucky, gory, haunted house tour thingies that pop up in Everytown, USA in October. (I love the Haunted Mansion at Walt Disney World, however. It is neither yucky, nor gory. It is fun!) I saw this piece on Facebook (the link is just below), and had to share it with you.  The reactions of this fellow/Andy navigating through Universal Studio’s Halloween Horror Night’s Maze are pretty funny, as a few yuckys and gorys jump out at him throughout. Apparently, Andy is more of a not-so-very-scary Halloween type, too. :o)

Check out their great article on WDW’s Haunted Mansion.

Now that you are armed with a sufficient list of Halloween films, both non-scary and a little scary, why not make tonight one for cookies, and a movie?  Whip up a batch of these Mummy cookies below, put one on your plate, pour yourself a cold glass of milk, put in a movie, get comfortable, and watch!

Wishing you a Happy Not-So-Very-Scary Halloween!

I attempt to post my blog weekly on, or around, each Monday.

To join my blog “following”, and receive “I’m Annette” via email, free, immediately upon posting, please sign up on the right-hand side of this page.

Inspired by a recipe from Pillsbury.com, or was it BettyCrocker.com?

Prepared white frosting in spray can

In large bowl, beat butter, powdered sugar and vanilla with electric mixer on medium speed about 2 minutes, or until creamy.

On low speed, beat in flour, and cocoa and 1 to 2 minutes or until well mixed.

Use flat tip of frosting can for mummy wrapping.

Add 2 m & m’s to each cookie for eyes, using frosting

If you prefer a not-so-very-scary cookie, skip adding the frosting “mummy wrap”. :o) 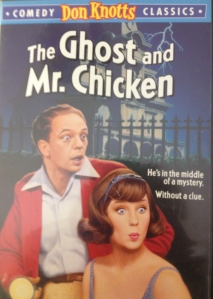 18 Responses to Happy Not -So- Very- Scary Halloween